Discover below some testimonials from donors, children’s sponsors or volunteers within the Sahayogi Foundation. 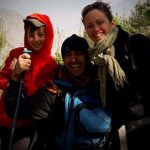 « Deeply moved by his story, we’ve decided to sponsor Lopsang TAMANG. Our family is indeed in love with Nepal, which is to us a country of marvels. There, we met and forged a close relationship with Sonam and Jyampa, cofounders of the Sahayogi Foundation. Therefore, we are keen on helping along with their project towards the children from Thulo Syabru, the village where the 2 of them come from. We’ve been to Nepal twice and could only notice how much these children needed assistance. So we are very pleased that Lopsang will go back to school in April 2018. We plan on meeting him next year while taking our next fair trade treking. »

« Currently settled in Bangkok, we’ve been lucky enough to visit many countries in Asia through these past years. Our travels made us genuinely aware of the extreme precariousness and inequality faced by many children in remote rural areas. An utterly significant concern when it came down to education. As children and young adults born and raised in France, we were entitled to go to school, then to university. Which was nothing but normality to us. But this couldn’t be farther from being something normal to these kids. Thus it only seems fair to us to work on offering one of them a chance to attend school and to get a thorough education.

Aiming to that, sponsorship looked like both a discrete and efficient way to help, keeping the child rooted on his / her land, close to his / her bearings and family.

While having this reflection going on, we got acquainted with the Sahayogi Foundation promoted with great engagement by one of its volunteer, Julie Bailleul. Sonam Tamang’s story, the way he founded Sahayogi and his remarkable commitment in helping the Nepalese children convinced us to support Lhasi TAMANG, a young girl, who’ll turn 5 next spring, just like our daughter.

We now hope with all our hearts to help Lhasi throughout her many coming school years, to visit her in Nepal and eventually to offer her a chance for a brighter future. »

« I had the best experience spending time with Sonam and his wife. They welcomed me into there home in true Nepali style and made me feel apart of the family. I spent my time volunteering at the local school (Vidhyananda Public School) which was around a 20 minute walk and I then returned on the school van after school. The school is small but plenty of children too keep you busy ! At the NGO I worked with tree children who are very friendly and love to learn new things, even after I had finished doing there homework and helping with there English skills I could hear them trying to speak French with each other which always amused me ! Thanks again for a lovely stay and I will see you again soon. »

« In May 2017, while trekking on the Tamang Heritage Trail, we could see the extent to which the mountainous and rural region of Langtang still bears the stigma of the 2015 earthquake. Two years after the disastrous earthquake, it is striking how the population still lives in poor conditions: a destroyed or dilapidated habitat, long and painful reconstruction (without any mechanical help, only by using the strength of the arms and legs), poor and rural population (still living traditionally of agriculture) isolated, children out of school, without real prospect of future…

Deeply touched by these findings, and conscious of our privileged status, we decided to commit ourselves to the Sahayogi Foundation, by funding the long-term schooling of a Nepalese girl (Bimala TAMANG, 6 years old).

For the same reasons that led us to choose the agency of Sonam TAMANG (small family agency, concerned about responsible tourism, solidarity and ethics), we decided to make our donation via the Sahayogi Foundation. Indeed, unlike some Nepalese foundations, which are sometimes seedy and unscrupulous, the Sahayogi Foundation is motivated by a genuine human commitment, real altruism on the part of Sonam TAMANG and the founding members (who themselves were lucky to be « sponsored » in their youth, a fact which profoundly changed their destiny).

Having had the opportunity to spend some time with Sonam TAMANG and his adorable family, to visit the school where the children are sent (Vidhyananda Public School), to exchange regularly with the members of the NGO, it is in confidence that we regularly renew our donation, used in total transparency for the benefit of the children.

Providing quality education to poor children in Langtang means offering them the opportunity to improve their lives, that of their families and the future of their country. Therefore, we invite you to be generous, to help the forgotten children of the Nepalese mountains and offer them a chance in life ! » 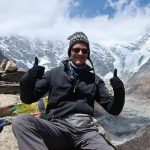 « Since my visit to the Tamang region, I understand the importance of reading, writing and foreign languages for the children to improve their lives and to bring Nepal to a higher level. To get this education, they need our help. I perceived the Sahayogi Foundation as a sympathetic organization whose founders are deeply rooted in the Tamang region. I trust them to use my donation optimally for the benefit of the children. » 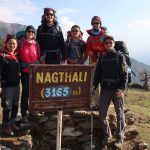 « I spent around one week with Sonam and Dawa (two of the founders) on a trek to the Langtang Valley, during which I was introduced to their newly established Sahayogi Foundation. The 2015 quake left many children as orphans and it is of utmost importance to provide not only food and shelter but also education to them. I decided to donate to Sahayogi because : 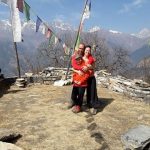 « 2015, we land in Kathmandu where we meet Sonam TAMANG and his wonderful family. First trek together in the Annapurna, an unforgettable trip. We go back home with sad hearts but with new friends.

Three weeks later, disaster, the earthquake ! We are relieved to learn that they are safe and sound, but desperate to discover that Sonam’s parents have lost everything and that many children in his village find themselves orphaned or destitute…

A few months later, we welcome Sonam in France. Strong mobilization to raise funds through the sale of Nepalese handicrafts, and to collect warm clothing for the population. Our friend leaves with 30 kg of various items to redistribute in his village.

Not wanting to stop there, we decide to set up a group and schedule a new trip. Two years later (February 2017), it is a group of 9 people that arrives in Nepal with 270 kg of warm clothing, plush toys and school supplies (collected in our children’s classrooms). An everyday schedule is set up: sorting, weighing and organizing the transport of 18 suitcases and 9 bags. A human adventure of sharing and organizing. We walk on the Tamang Heritage Trail to meet extraordinary people. We bring 70 kg with us to Gatlang and Tatopani. The remaining 200 kg leave by truck to Thulo Syabru. Despite this fruitful distribution, we felt helpless because the situation was even worse than we could imagine…

We do not wish to leave it at that. We will continue to organize group treks to bring as much business as possible to the poor, to share unique moments with Sonam and to help Nepalese children.

Via the Sahayogi Foundation, we also donated 300 euros to help young Lopsang (17 years old) to continue his studies.

If you also want to help a child to follow a normal schooling, do not hesitate to support the NGO Sahayogi ! »